Since 2015, Zelda School has been partnered with Chuni Devi School in the Kathmandu valley, through the charity Global Action Nepal. Chuni Devi, which provides education to nearly 100 children from pre-school/reception through to Year 8, lost four of its seven buildings during the 2015 earthquakes. Water supplies to the school were also damaged. The Zelda School community has raised nearly £3000 to help reconstruction efforts at Chuni Devi through various sponsored events, chai and book sales. This money has been used to plaster and floor a Temporary Learning Centre so that it could be used through the cold winter months, and to construct a rain-water collection system so that children and teachers could have access to clean water again. 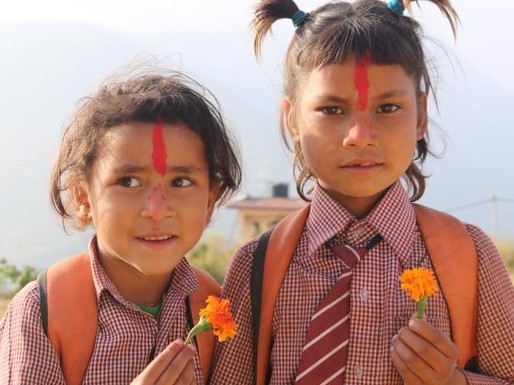 Over the last few years children at Zelda School and Chuni Devi School have been busy exchanging letters and drawings, and learning about each other’s lives. Upper Kindergarten children studied a topic on Nepal, learning about Nepali culture and traditions, what happened during the earthquakes, Nepali currency and script – even learning how to write their names in Nepali.

In November 2016 children in both schools took part in a fundraising event ‘Run for Nepal’ which saw nearly 500 children from nine schools in the UK and Nepal all running at the same time to raise money for the Nepal schools’ reconstruction. The schools exchanged photos and video messages before and after the event, and enjoyed it so much they are hoping to take part again this year.